At one point, they unfurled a giant banner in the style of Sanders’s campaign logo, reading: “Socialism SUCKS.”

One participant from Columbia, South Carolina, who identified himself as “John Hancock,” said the purpose of the demonstration was simply “straight comedy.” “This shit gets too serious,” he told Breitbart News. 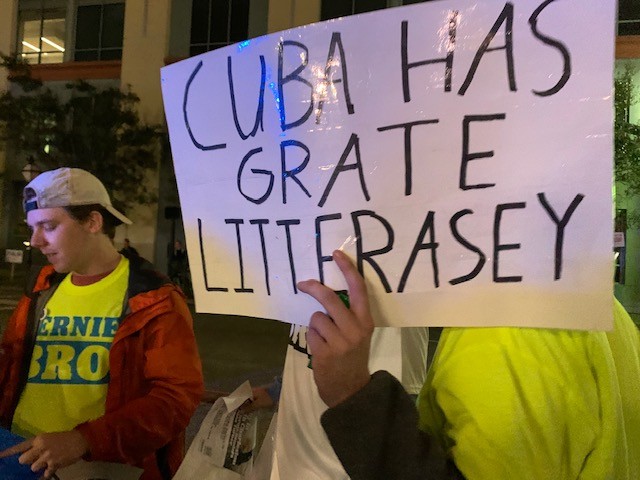 But there may be more than fun at stake.

Trevin McKoy, a senior at the College of Charleston studying political science, told Breitbart News that the group was partly organized through the Committee to Defend the President, a super PAC.

The super PAC paid for a giant “Biden Corn Pops” sign, a reference to one of former Vice President Joe Biden’s legendary tales. But “everything else is homemade,” McKoy said.

The group includes conservative activists from the college, as well as the University of South Carolina.

The term “Bernie Bros” has recently emerged in the political discourse as a reference to aggressive supporters of the Vermont senator, some of whom have been accused of harassing supporters of other candidates online.

“Somebody stopped me and said, ‘I honestly couldn’t tell if you guys were “Bernie Bros” or not, because y’all are just like them, but a little bit more funny.” 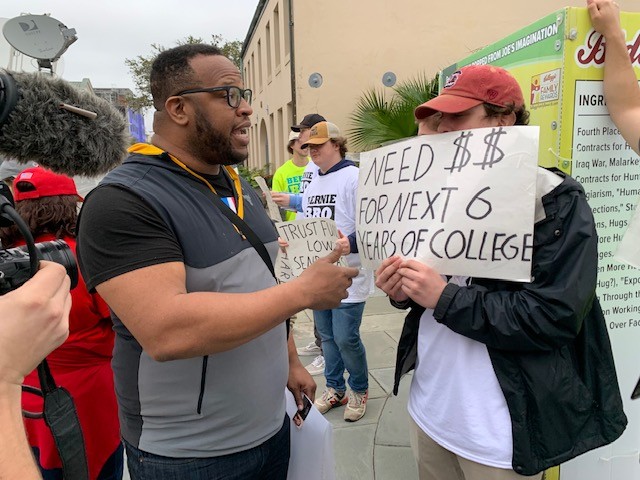 “We’re taking this with a grain of salt, man. This is supposed to be fun,” McKoy added.

There were a few face-offs with actual supporters of Democratic candidates, and a few choice words exchanged. The only insult that bothered him, McKoy said, was being called a “trust fund baby.”

“My parents are working class. I’m working class. I’m paying for college mostly myself,” he said, adding that many Sanders supporters on campus were, in fact, being supported by their parents. “A lot of them are trust fund students.”

**When you provide a phone number, you will also be opted into our text message campaigns, which are sent using peer-to-peer technology. Msg. and data rates may apply. Subject to Terms and Conditions. You may unsubscribe at any time by responding "Stop" or "Cancel".

The use of the name and/or likeness of any candidate, officeholder, or other individual is for the purpose of CDP's political communication only and IN NO WAY indicates any authorization by, affiliation with, direction from, or endorsement by that person.